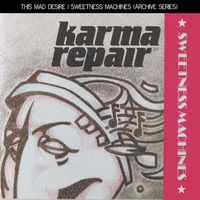 As of January 8, 2021, the Sweetness Machines album is now available on all major streaming platforms. The album was originally released on CD in 2000 under our then band-name Karma Repair and has been available on Bandcamp for a while. Featuring Bonar Bulger on guitar, Gerald Taylor on bass, and Dave Bukta on drums, it was recorded by Andrew McPherson at the Monastereo in Guelph, Ontario. The music is fairly progressive and was influenced by David Bowie, Radiohead, and other bands from the era. A real time capsule! Some of the songs date back to the old Bloodflowers band that Gerry and I had in high school in Thunder Bay (Black Star, Razorblade Man). Actually from that same high school era is Perfect Ring on the new American Dream album. Some great songs were written when we were teenagers! At the bottom of this page are links to all the major streaming platforms where you can check it out!